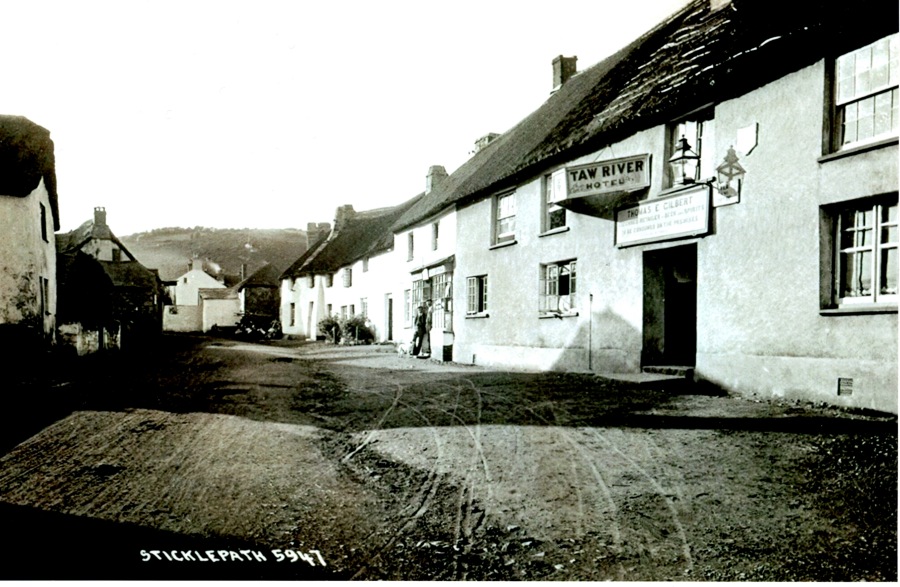 Studying a village and its inhabitants is rather addictive. There are lots of possible avenues to explore. I have made a start looking at households in the 1841 census. However I also have started a list of some of the burials in the Quaker Burying ground. Some people appear in both. One of those is John Cann, buried 25 October 1868 aged 61. This is ‘Part One’ of the story of John and Mary Cann, focussing on the post office:

John Cann, a blacksmith, and his wife Mary opened a Post Office in Yew Tree Cottage, Sticklepath in 1828, then a 4 roomed thatched cottage, opposite what is now the Taw River Inn. The same house had reputedly belonged to Bill Brewer previously (of ‘grey mare’ fame), and at some point was a bake house, as large ovens were removed in the early 1950’s.

Uniform pre-payment for letters was not introduced until 1839 and the famous penny black stamp in 1840. Before that, when it came to receiving mail, not everyone could afford to pay cash for the letter they received. Payment in kind was possible – bacon is mentioned as an option. Otherwise the letter would be sold to a neighbour who would no doubt enjoy being first with the news!

The Western Times newspaper tells us that Sticklepath sent and received post daily via the ‘Falmouth Mail’ coach from Exeter during the 1840s. Mary would hand the letters through the bedroom window or hang the sealed bag outside the window, where it would be picked up and exchanged for any in-coming mail.

In 1955 Sticklepath women’s institute booklet ‘The Story of Sticklepath’ reports that one day Mary “inadvertently sealed up her snuff-box in the out-going bag, but it was rescued in Exeter and returned to her.”

Sticklepath Post Office was run by their descendants for 112 years, often with family members as postmen. John and Mary’s son-in-law Richard Yeo took over as sub-postmaster, at Sunnyside on the opposite side of the road, followed by his son John who I suspect had the post office back at the other side of the road in one of the two cottages belonging to Steddefords, opposite the present village shop. Shop signs can be seen there on postcards of the time.

The Exeter and Plymouth Gazette, Friday 20 September 1940 reports that Miss Mary Yeo, (known as Pollie), postmistress for 17 years and one of the oldest residents of Sticklepath at the time, was retiring. Her brother Sidney Yeo, rural postman was also to retire after 25 year’s service. I suspect they were the last of the family in Sticklepath to bear the Yeo surname too.

For those researching family history, there are no post office records of sub-postmistresses or even postmasters, though they had to be formally approved. However, there is a chance postmen, direct employees of the post office, will have surviving employment records.

This ‘One Place Study” of Sticklepath is just starting. Anyone able to contribute stories, photos, facts or documents would be welcomed. (We avoid mentioning living people other than as sources of information or photos). Comments are welcomed, here or on facebook or email: shields_h_f@hotmail.com

Follow Sticklepath a Village and its People on WordPress.com

Another place of interest? Check the Directory – is it

Online genealogy courses including a One Place Study course